You pop the lid of your garbage bin and drop trash in it every day, but have you ever stopped to think about why you use this container? With access to trash cans and dumpsters around our homes, schools, workplaces, restaurants, streets, and more, they have become fixtures in our lives that we take for granted.

Imagine a world without the garbage can—for many centuries, people did without them. Before the cans and bins we know and love became household items, trash was thrown into the streets, buried in holes, and even dumped into bodies of water.

Clearly, for the purposes of improving sanitation, odor, and more, there needed to be a better way to dispose of waste. Follow the journey of the humble trash can through the timeline below as it evolved to meet our changing needs through the ages.

The garbage of the ancients was very different from today’s trash. In early human history, waste was mostly ash from fires, wood, bones, and vegetable waste. The edible portions of it were used to feed animals, and what remained was put in the ground to decompose. The excavation of ancient rubbish dumps by archeologists reveals miniscule amounts of ash, broken tools, and pottery, meaning early civilizations reused and repaired what they could, rather than dumping it.

Other strategies were employed to dispose of waste. Large dump sites were used to deal with excessive garbage that couldn’t be reused or given to animals. On the Mediterranean island of Crete, citizens dug large pits and threw waste in them. Such dump sites were the norm for a long time, and burning trash was an equally popular solution. Sometimes, people opted for the most convenient, though most unsanitary, idea to rid themselves of garbage: throwing it out of their doors and windows, where it piled on the street.

200 AD. To cope with a growing population’s garbage, the Romans devised the first sanitation force. This consisted of teams of two men walking along streets to pick up and toss garbage into a wagon that transported it to a remote site. 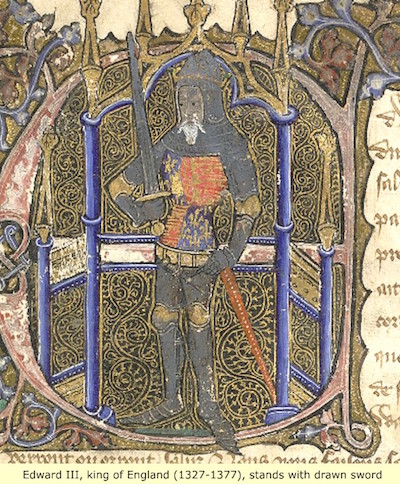 A common practice during the Middle Ages in Europe was throwing trash into the streets. When it piled up, this garbage caused a terrible stench, harbored rats and other pests, contaminated water supplies, and facilitated the spread of diseases like the infamous black plague.

Circa 1350. Recognizing the dire need to prevent such unsanitary conditions, Britain passed a law that mandated clean front yards. Unfortunately, this law was not upheld with any real effort and most garbage continued to be either burned outside in fires or left near houses and in streets.

1354. King Edward III ordered English rakers to rake all refuse from streets and alleys and remove it once a week. These men were early versions of today’s garbagemen. With the waste they collected, the rakers often drove their cartloads to the Thames or Fleet Rivers to dump them.

Wagons and carts like those of the rakers soon became common for carrying trash out to bury in large holes and unload into rivers and oceans.

Circa 1407. Britain passed a law declaring that waste must be stored inside until rakers remove it.

Early America and the Industrial Revolution 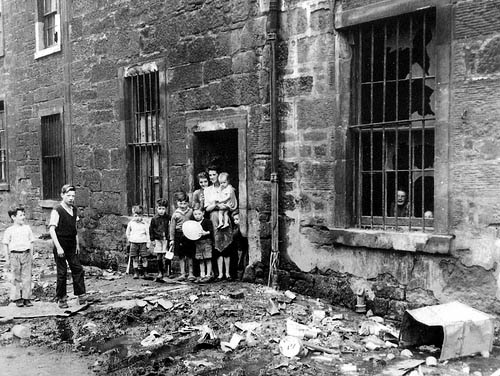 With swelling populations in urban centers and greater amounts of materials and machinery used in mass producing goods, new ideas were called for to manage waste and protect public health.

Circa 1757. Despite the new laws, trash continued to be dumped in streets and in front of houses. In America, Ben Franklin started the first street cleaning service and encouraged the public to dig pits to dispose of their waste.

1842. A report in Great Britain linked disease to filthy environmental conditions and ushered in what is called the Age of Sanitation. However, this movement took time to enact in America.

1864. Health officials in Memphis, Tennessee, became aware of a possible connection between the spread of Yellow Fever in the Memphis area and the garbage being dumped throughout the city. To minimize the threat of disease, residents were instructed to take their garbage to specific locations on the edge of town. Laws also started being passed to stop trash dumping in the streets.

1866. New York City’s Metropolitan Board of Health declared war on garbage, forbidding the “throwing of dead animals, garbage or ashes into the streets.”

1874. In Great Britain, the idea of drawing energy from waste was being developed as the first “destructor” was designed and built in Nottingham. Destructors were incineration plants that burned mixed fuel, producing steam to generate electricity. Over the next 30 years, 250 destructors were built, but they eventually fell out of favor because emissions in the forms of ashes, dust, and charred paper filled the air in neighborhoods.

1908. In America, dumping waste in the most convenient location was still permitted. People would dump in the ocean, wetlands, or any available wasteland.

Most small towns and cities were using piggeries, which were small farms full of pigs that consumed food waste. It took 75 pigs to eat about one ton (2,000 pounds) of food waste each day. Whatever wasn’t food waste was usually burnt or buried.

And, still, no trash cans.

First Appearance of the Garbage Bin

Finally a solution and a waste cleanup system came into place and is reflective of what we still use today.

1875. Garbage collection became an official system in England. The first garbage receptacle appeared, which was used to store ash from burned waste. It was emptied on a weekly basis and residents were charged even if the bin was empty. The bins were made of metal, wood, or even buckets people had lying around.

1885. The first American garbage incinerator was built on Governor’s Island, New York. Over the next 20 years, close to 200 garbage incinerators were constructed across the U.S. Soon after, Americans also adopted the idea of a garbage bin.

1897. The first self-propelled garbage trucks were ordered by Chiswick District Council from the Thornycroft Steam Wagon and Carriage Company, replacing the traditional wagon and cart garbage haulers. They were described as a steam motor tip-car, a new design of body specific for "the collection of dust and house refuse." 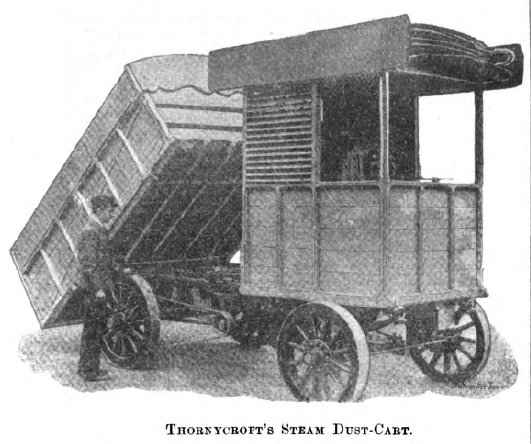 1914. After much trial and error, incinerators became more popular and about 300 were in operation throughout the U.S. and Canada. Horse-drawn carts were still used to collect trash and take it to incinerators.

Shortly after, the carts were replaced by motor cars, simplifying the work of garbage collectors.

1920s. “Reclaiming” or filling in wetlands near cities with garbage, ash, and dirt, became a popular disposal method.

The first plastic trash cans that resemble what we know today begin to show up.

1930. A new plastic, polyvinyl chloride, was patented by B.F. Goodrich. It was used to replace rubber as protection against corrosion and for adhesives.

Another plastic, polystyrene, was put on the market by the German firm I.G. Farben and was produced by the Dow Chemical Company. The hard, shiny material was molded into tackle boxes, refrigerator linings, and other items like trash cans later on.

1937. The first American mass‐production, hydraulic rear‐load refuse packer compacting truck was introduced. It was called the Load Packer and patented in 1938 by Garfield Wood. Because resources were needed for WWII, it was not widely used until the late 1940s. 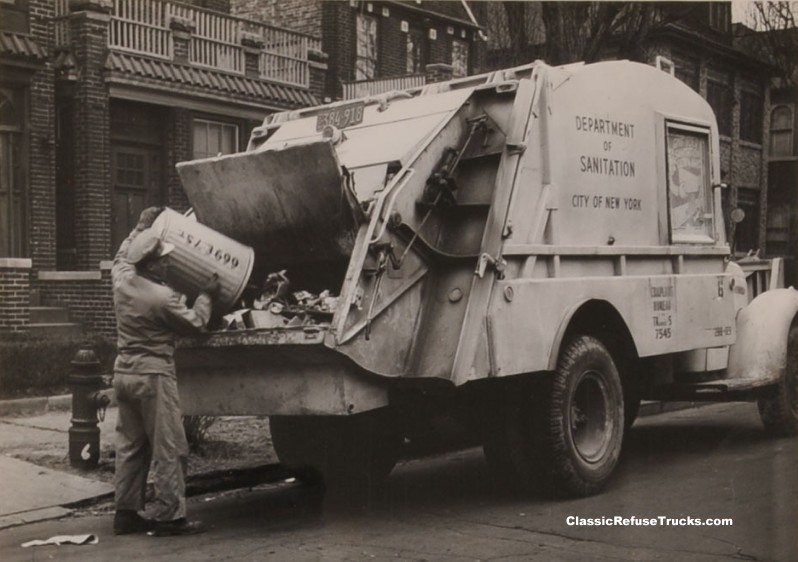 Circa 1945. By this time in the U.S., about 100 cities were using sanitary landfills. Before then, many used oceans as dump sites, and burning trash in yards was still common.

1950. Trash bags were invented to line garbage cans. The plastic trash bag was first developed for commercial use and sold to hospitals, which needed to dispose of large amounts of waste. Larry Hansen worked for Union Carbide, who purchased the invention from Harry Waylyk and Frank Plomp, and they introduced the “Glad Garbage Bag” for home use (the green bag). These bags were a huge hit and became staples for virtually every business and, eventually, every home.

The residential collection truck was updated to a side-load process. After the garbage was loaded, it was packed into the back of the truck with a huge hydraulic-powered blade, which is still used today.

Trash Was Still a Problem

Trash disposal woes were far from over, despite the progress made over previous decades.

1965. The U.S. government enacted the Solid Waste Disposal Act, which called for the nation to find better ways of dealing with trash.

1968. Around one-third of the U.S. started sorting their garbage, calling for more garbage bins. Recycling became a mainstream concept. 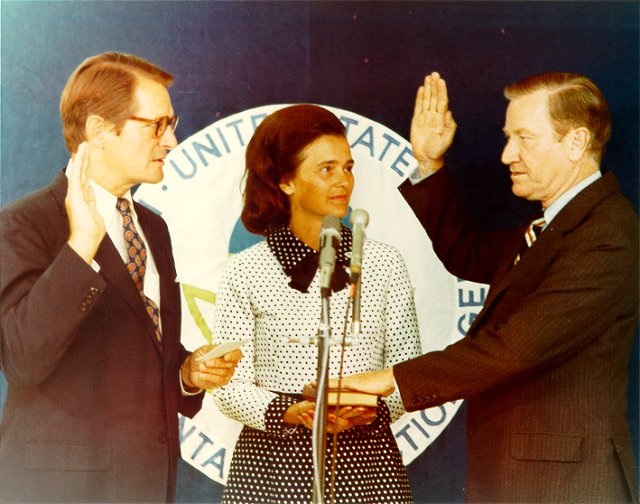 1970. The Clean Air Act was passed in the United States. After the act was in place, many early incinerators without air-pollution controls were shut down.

The no-burn ban began and people slowly stopped burning trash in their yards.

1975. All 50 U.S. states finally had solid waste regulations, though they were different from state to state. That was only 41 years ago!

1980. Polypropylene is introduced and used for butter, margarine tubs, drinking straws, and many of the garbage cans we see today.

As garbage collection became more common and advanced, garbage bins did too. The garbage can changed its appearance in the 1980s as city pick-up companies started using trucks with arms that automatically picked up trash bins.

1990–2000. Garbage-truck technology changed dramatically. A variety of trucks had large, powerful hydraulic arms and packers. They could pack and haul two or three times more garbage than previous models. 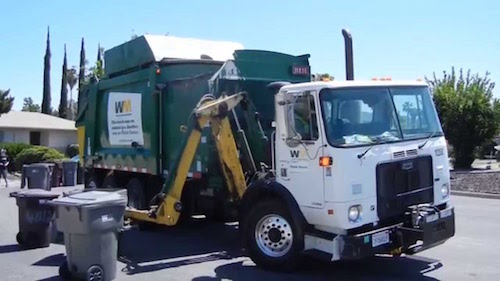 2012. More than 34.5 percent of solid waste in American towns and cities was recycled or composted, conserving vital resources and energy, reducing greenhouse gas emissions, and protecting air and water quality. 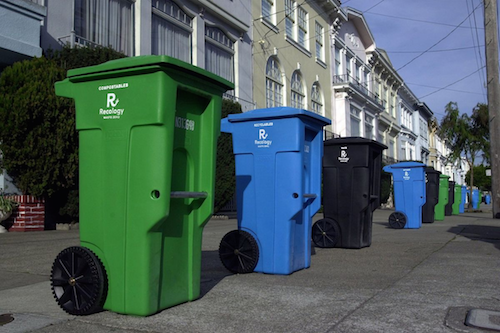 Reflecting on the Evolution of Waste Disposal

Next time you toss a piece of garbage in your trash can, remember you are using a piece of technology that has advanced leaps and bounds over many centuries.

Had the ratio of trash per person not increased over time, and if packaging and new plastics hadn’t come into wide use, disposal solutions like bags and bins wouldn’t be necessary. Today, we are attempting to reduce our need for them by going to the root of the problem—figuring out better ways to recycle and to reduce our waste than ever before.