Societies have created a great number of marvels of architecture: amphitheaters, opera houses, auditoriums, theaters, coliseums, and convention centers. One of the most exciting forms is the concert hall. They are the result of incredible feats of engineering and architecture. Throughout history, concert halls have served as venues for arts and cultural attractions, as well as areas for political gatherings and government assemblies.

For many people, the beauty of the performances that take place in a concert hall is reflected in its exterior and interior design. Some concert halls are designed to blend in, reflecting the surrounding architectural features, while others make a grand statement about the artistic value of the space.

Naturally, proper cleaning and maintenance has been what has kept these concert halls pristine and clean to be enjoyed by the masses for decades, and trash cans are one important part of that. Here, we will take you through some of the most famous concert halls in the world, diving into their architecture, famous performances, as well as other interesting facts about their history. While we’re at it, we’ll introduce you to some high quality concert hall

trash cans that can blend in and enhance the sanitation in any venue.

Located in downtown Los Angeles, California, the Walt Disney Concert Hall was designed by Frank Gehry, and opened in 2003. It seats around 2,265 people, and is the home of the LA Philharmonic. Lillian Disney gave the money to build the performance venue in 1987 as a gift to the people of LA. Gehry probably would have appreciated the look of our event venue trash cans, as they match the modern aesthetic of the building. 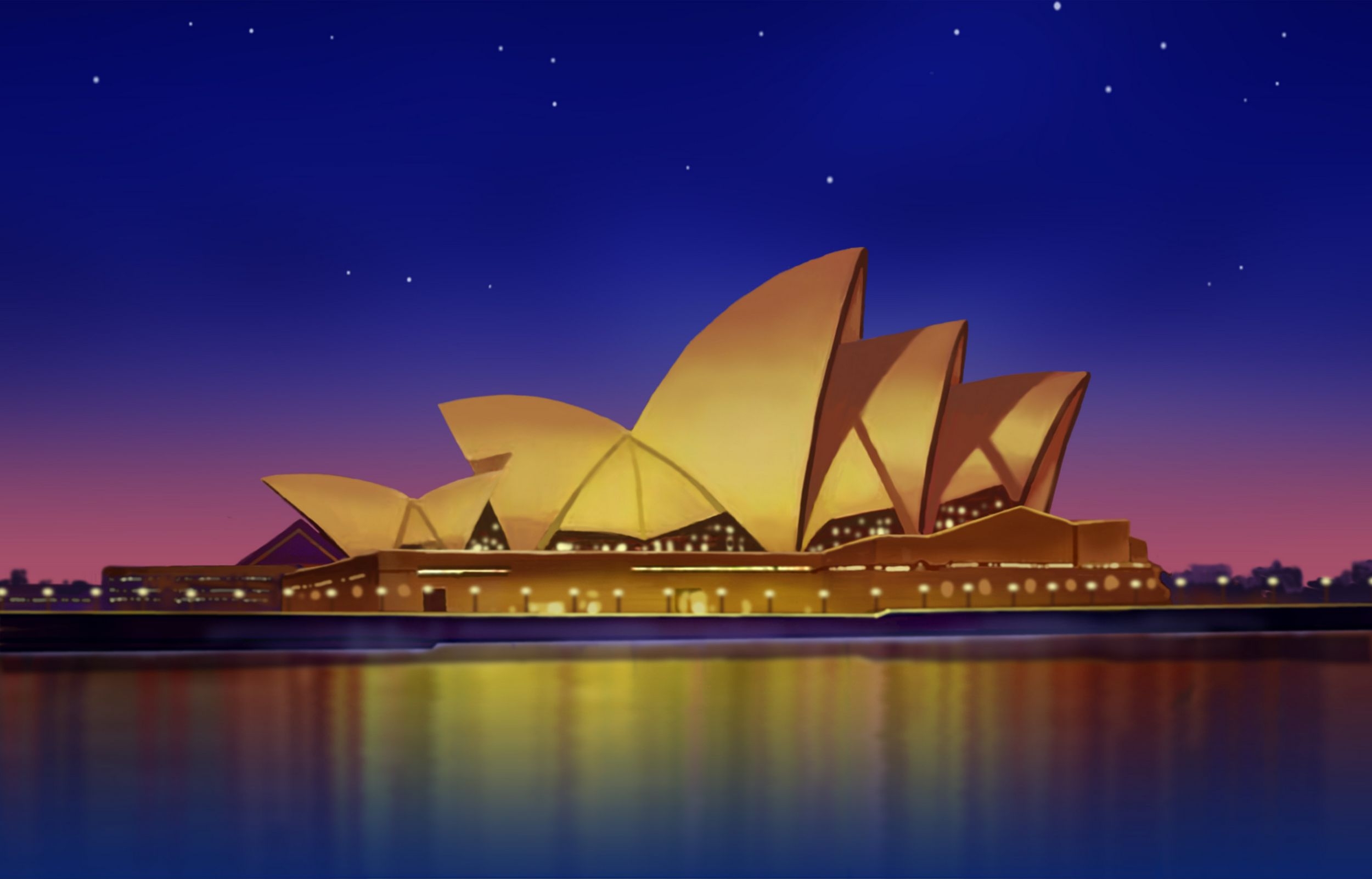 The iconic look of the Sydney Opera House was designed by Danish architect Jørn Utzon, but ultimately completed by a team headed up by Peter Hall. Construction started in 1958, and the project was completed 15 years later in 1973. It occupies the whole of Bennelong Point on Sydney Harbour, and has multiple venues that host around 1,500 performances a year.

Its appearance isn’t the only thing special about this building — The heating and air conditioning system is powered by sea water from the harbor. The temperature in the concert hall is very important when the Sydney Symphony Orchestra takes the stage. To keep their instruments in tune on stage, the hall must be precisely 22.5 celsius. 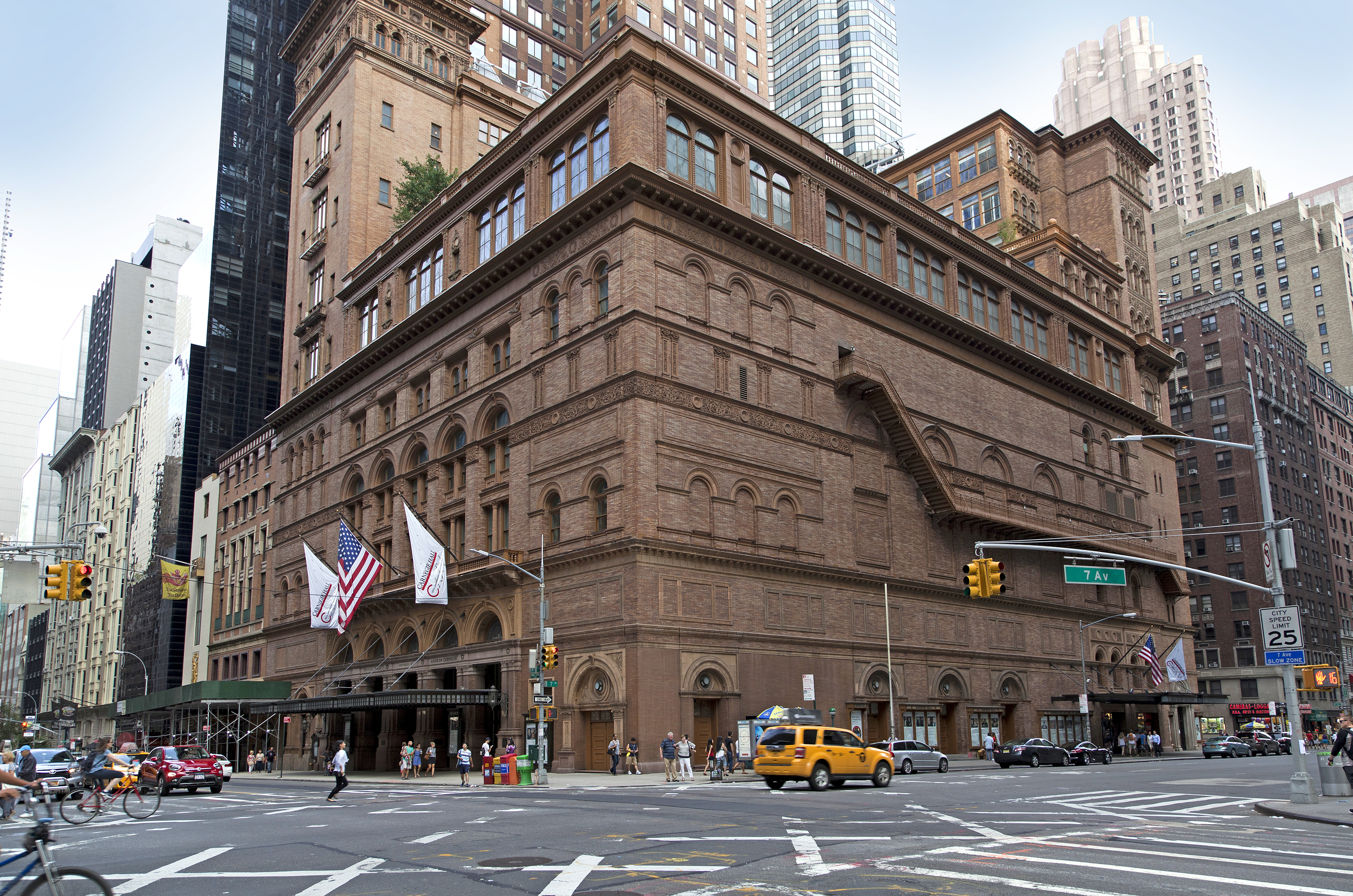 Smack dab in Midtown Manhattan, NYC, Carnegie Hall is one of the most famous concert venues in American music. It hosts around 250 performances a year, and was built in 1891 by architect William Burnet Tuthill, who was commissioned by Andrew Carnegie. It has three auditoriums that can seat 3,671 people. Performances that took place at Carnegie Hall range from orchestras and jazz to rock and roll and pop music. Famous performers that have appeared at Carnegie Hall include:

New York is one of the most fashionable places in the world, so why not adopt our fashionable concert hall trash cans, fit for new york to elevate the aesthetic of any room without distracting from the events that take place there? 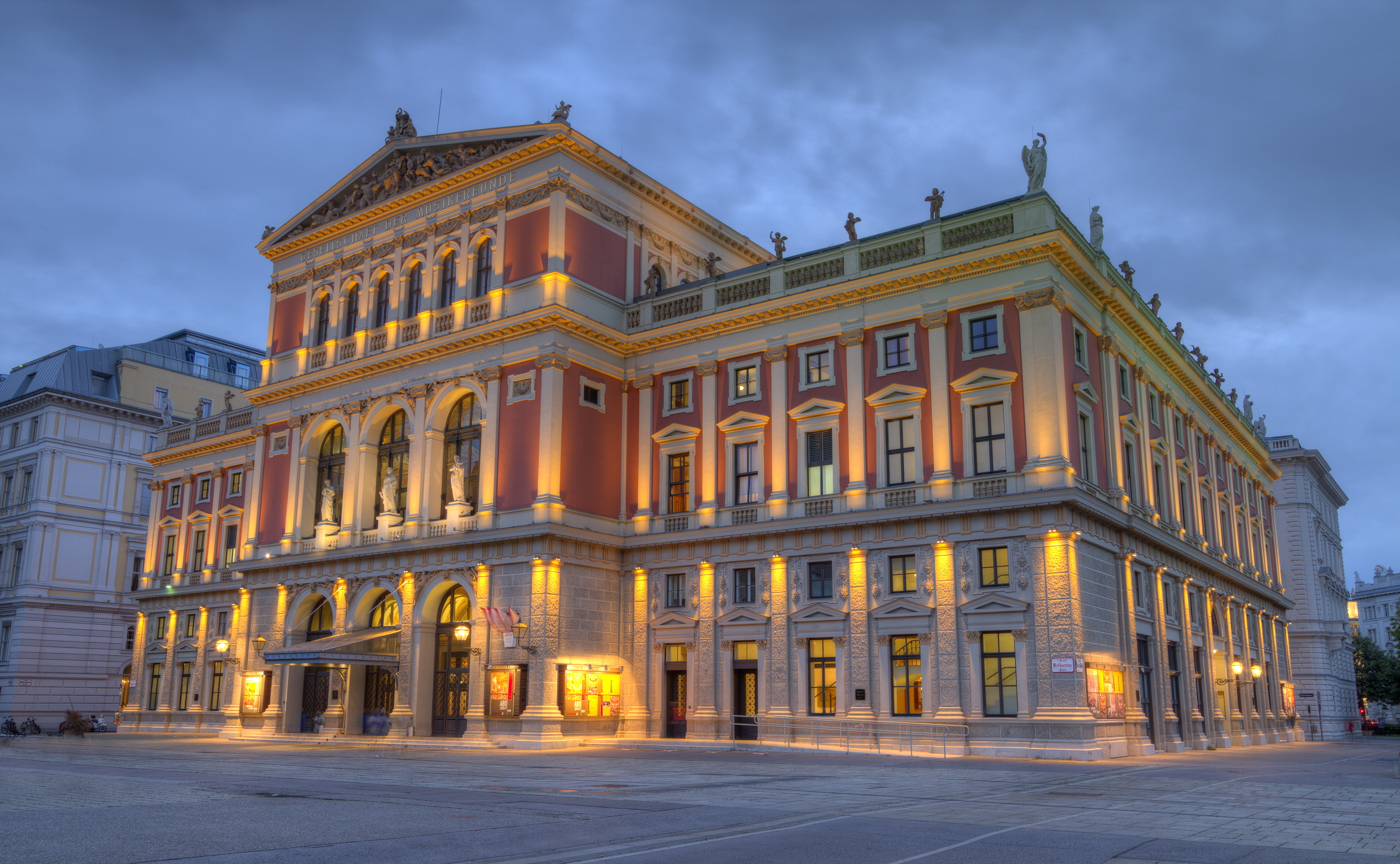 Inaugurated in 1870, the Musikverein is considered one of the finest concert halls in the world. It is the home of the Vienna Philharmonic and has a long, narrow rectangular shape, which in spite of it not employing many modern acoustic techniques is considered of the finest quality. 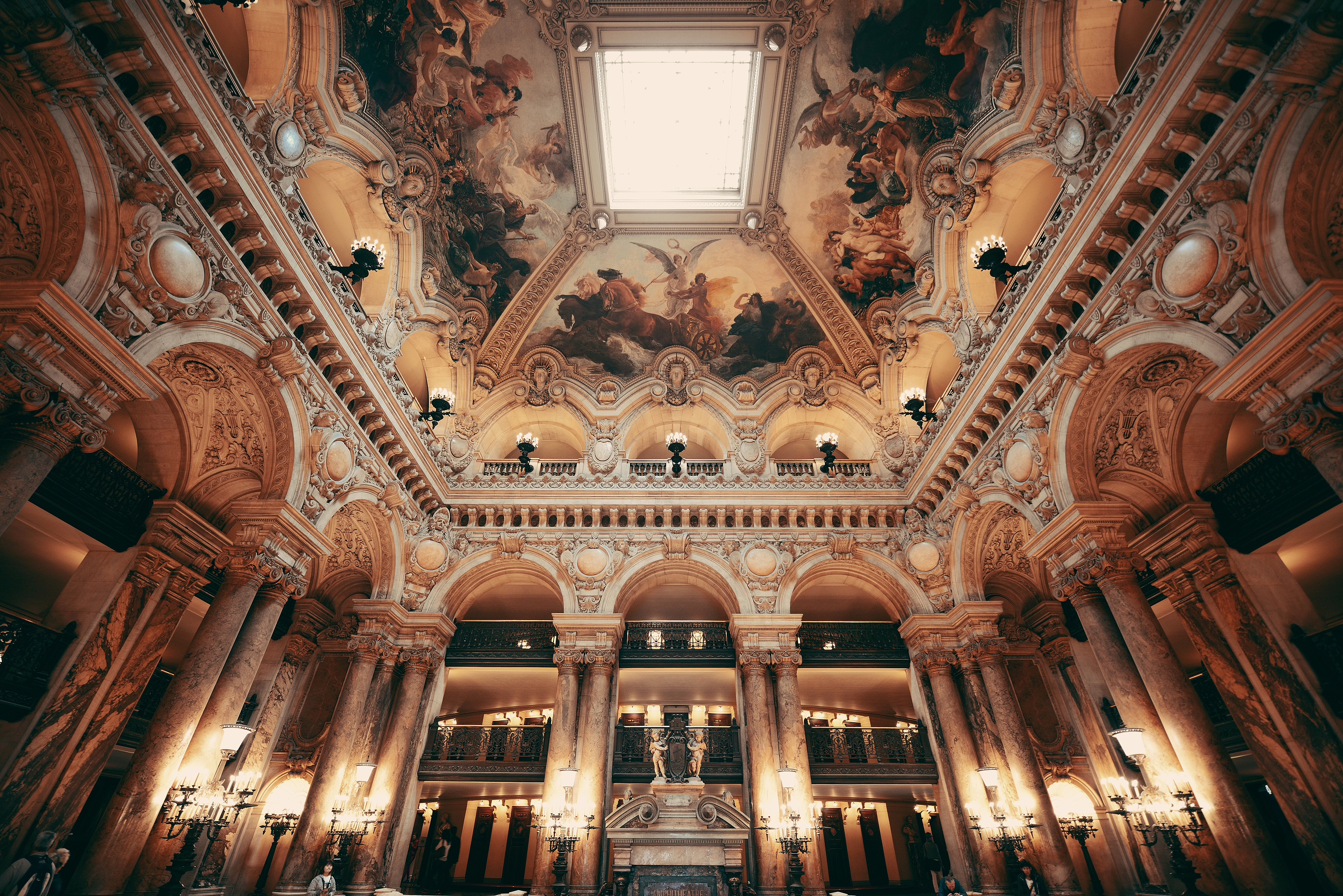 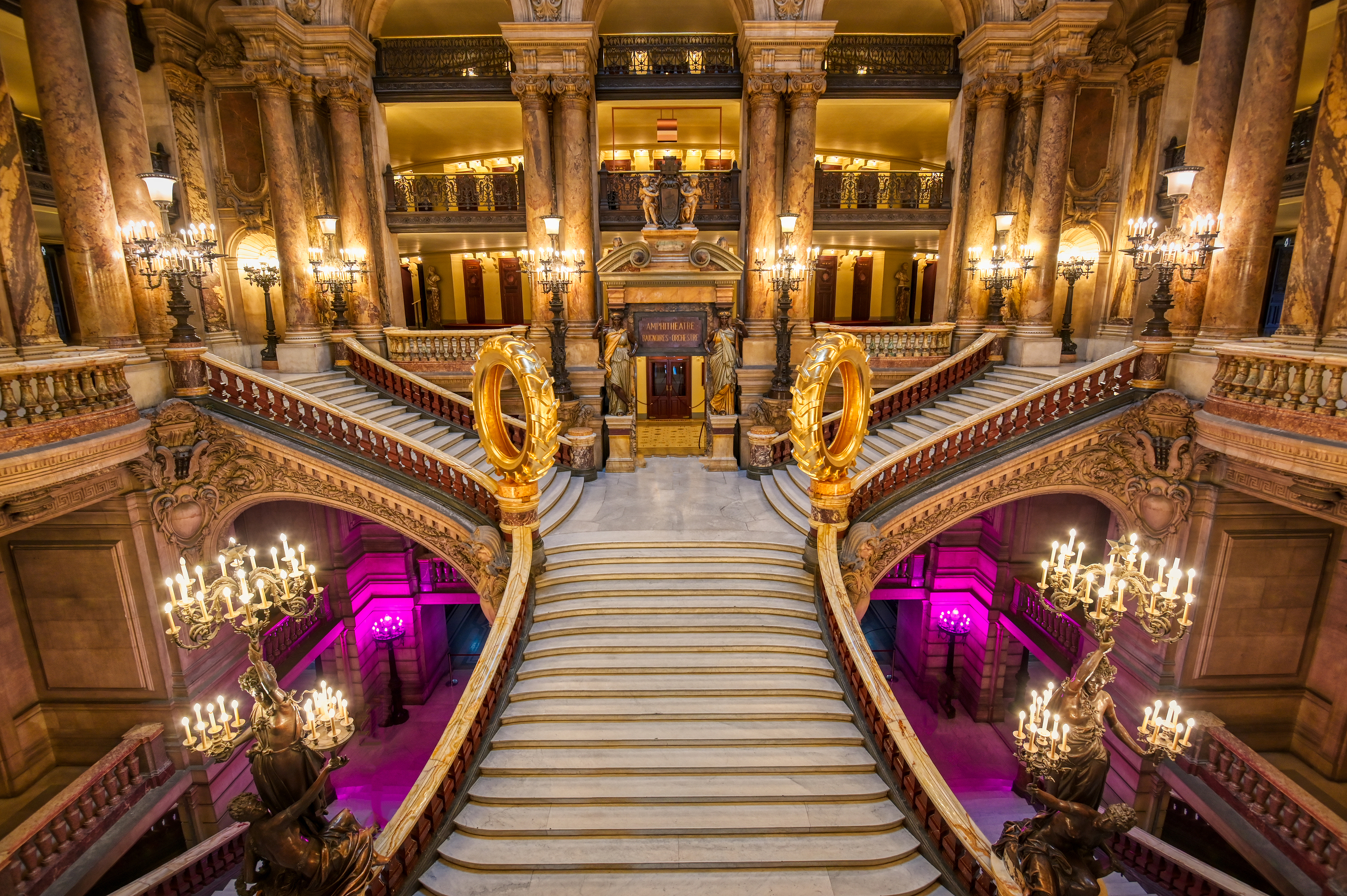 By the order of Emperor Napoleon III (nephew of Napoleon Bonaparte), the glamorous Palais Garnier was built in 1875 to house the Paris Opera and the Paris Opera Ballet. It’s a French historic monument, named after the architect Charles Garnier. In 1989, the Opera Bastille replaced it as the primary French opera house.

The most notable features of this concert hall is not just the music inside it, but the stunning art and sculptures that line the walls. 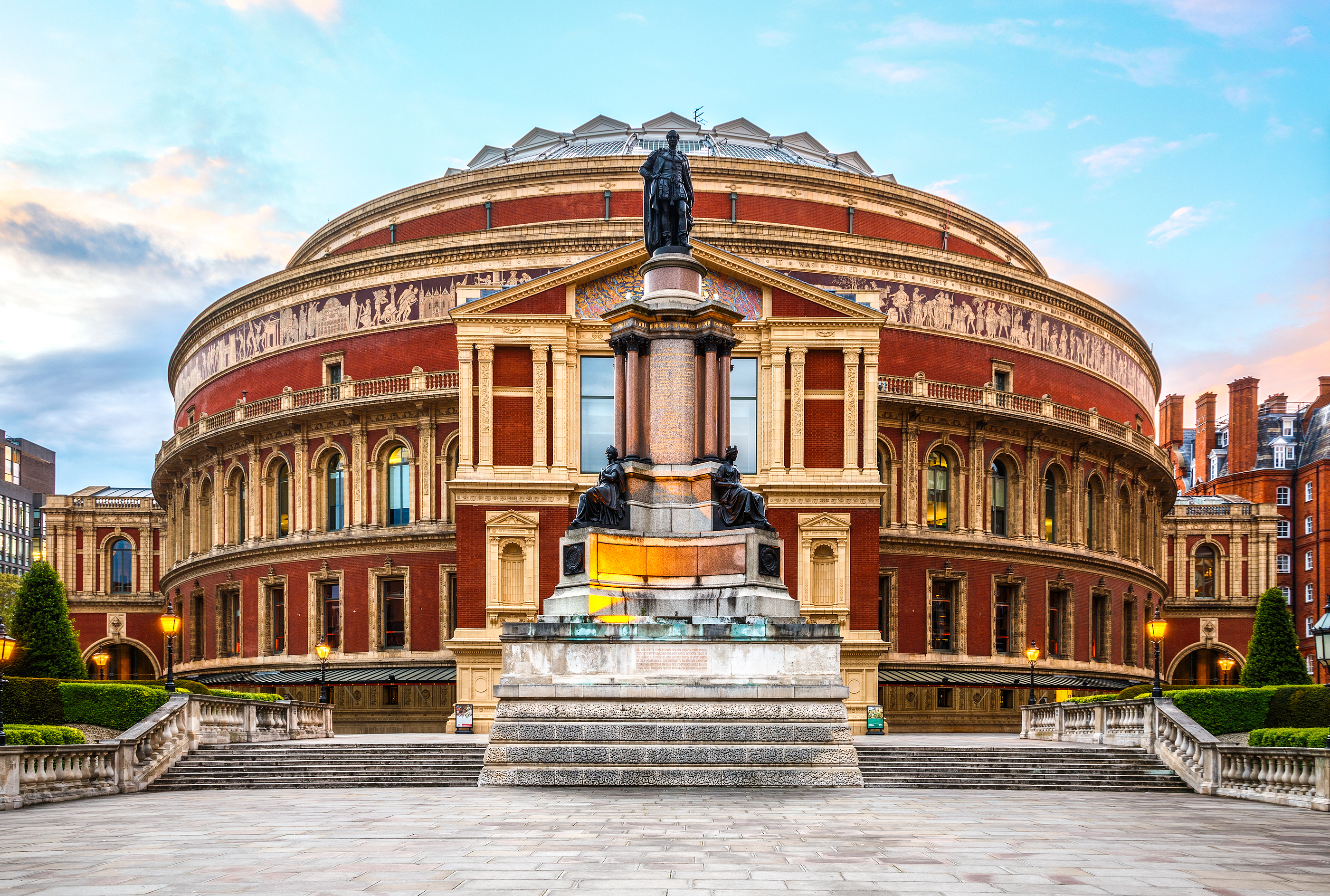 This 5,000+ seat hall was opened in 1871 by Queen Victoria. It is one of the most notable halls in British culture, hosting the famous Proms every year, and the hall itself was named after Prince Albert, the deceased husband of Victoria. If you want some regal trash cans to match the majesty of the theatre, our event venue trash cans are one of the best picks for your garbage can collection.

The outdoor venue and concert hall has been a place for people to gather and appreciate the arts. In fact, many hypothesize that Stonehenge was used for early performance due to its unique acoustics. The Greeks were not the first civilization to honor or appreciate the arts either, though we often think of the Colosseum when we think of an outdoor venue. Many modern amphitheaters take advantage of the natural world to create acoustic soundscapes.

An outdoor space needs an abundance of sturdy outdoor concert trash cans to host the crowds of visitors that flock to these gorgeous venues. 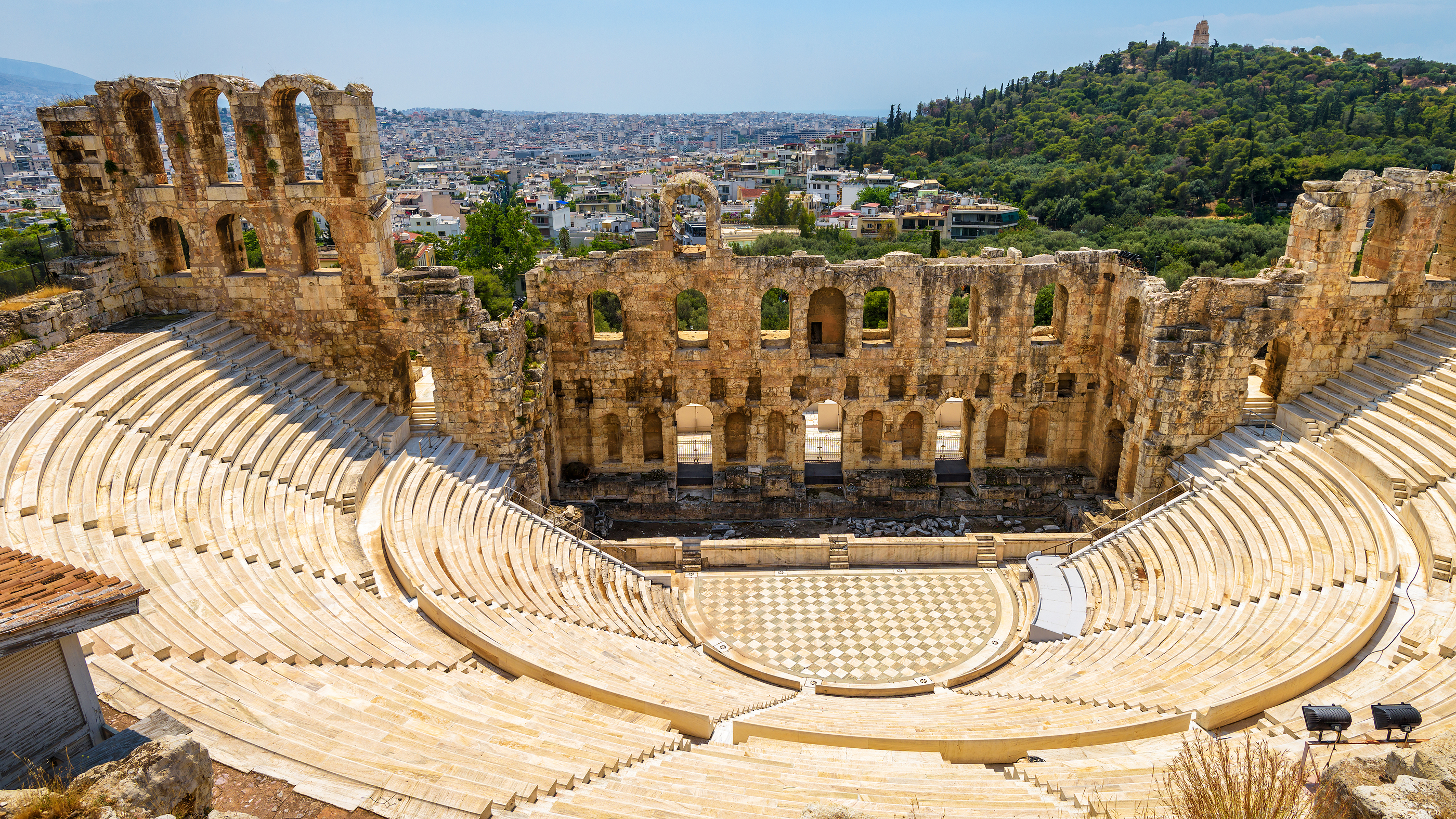 7. The Odeon of Herodes Atticus

This ancient stone Roman theatre was built in 161 ACE and is one of the oldest outdoor venues in the world. It is located on the southwest slope of the Acropolis of Athens, Greece. With an audience capacity of 5,000, it’s the home of the Athens Festival, a yearly celebration of Greek arts and culture. 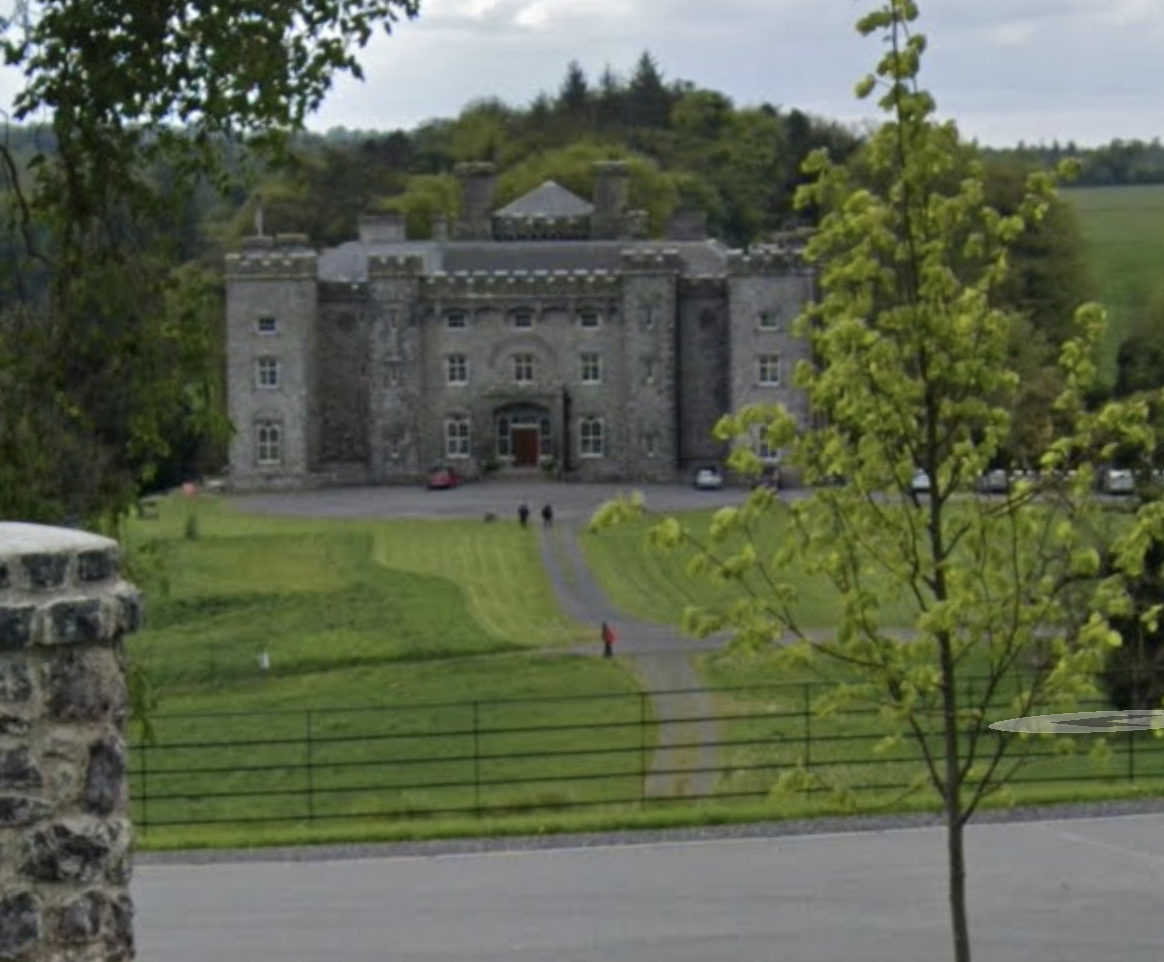 For the rock concert's this castle’s grounds hosts, the name “Slane” is appropriately metal. Good thing we got the metal concert garbage cans to match!

Built at an unspecified time in the late 18th century, reconstruction dates back to 1785 by James Gandon, James Wyatt and Francis Johnston. The castle is located in Slane, Ireland, near the River Boyne, and is an internationally recognized venue that hosts a wide variety of musical acts, and is the home of the Slane Festival.

Audiences gather on the castle grounds, as opposed to the castle itself, for rock concerts. Famous performances include:

In addition to the castle and the concert venue on the 1,500 acre estate, is the Slane Distillery, known for its triple casked Irish Whiskey. 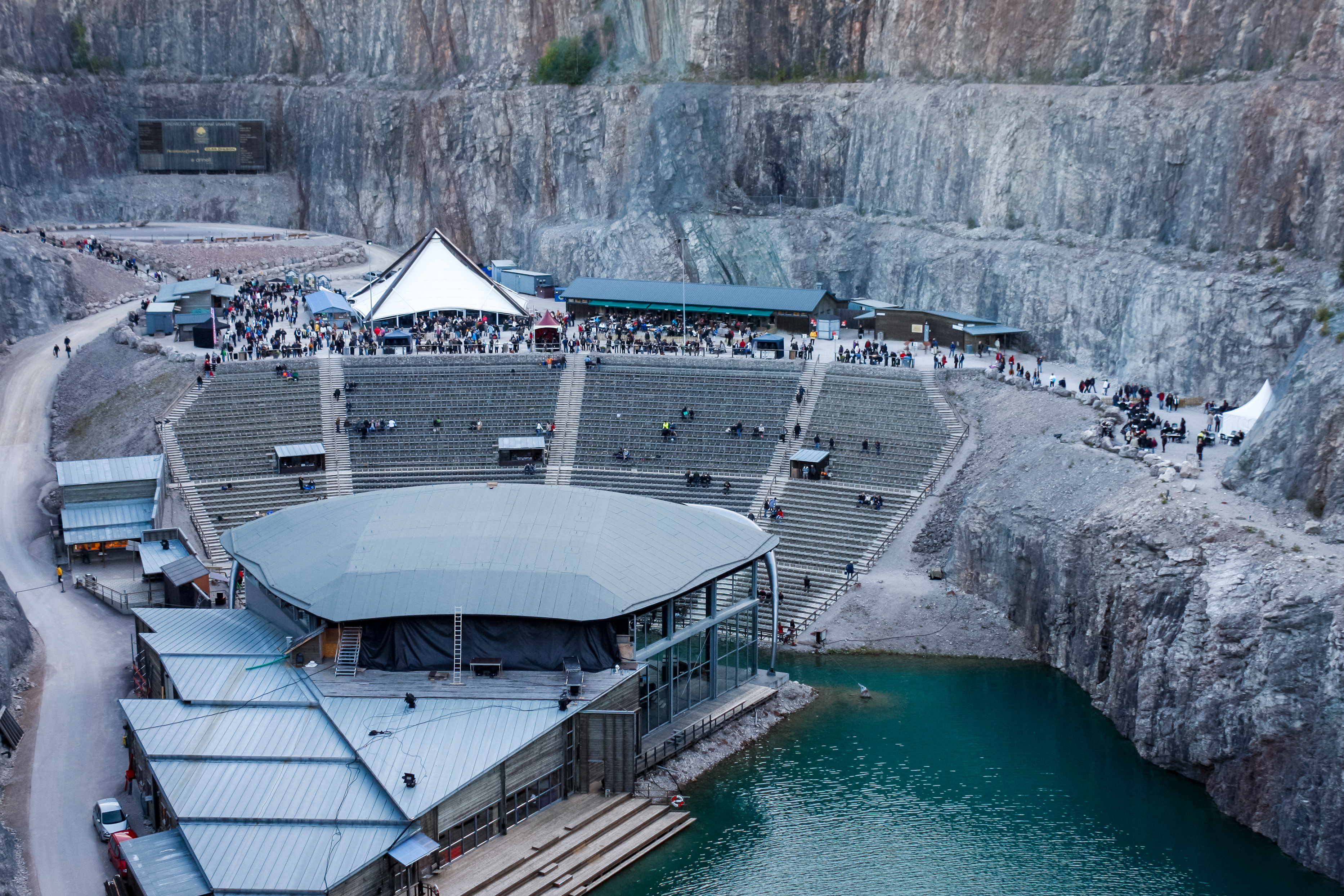 Surely, only our sturdy and discrete concrete amphitheatre trash cans and furnishings are fit for their concert hosting needs without distracting from the natural beauty of the site.

The 4,000 seat concert hall opened in 1995, and the most beloved of performances that take place here are the opera concerts. It’s considered to have some of the best acoustics in all of Europe, thanks to a meteor impact approximately 360 million years ago that formed both it and Lake Siljan which it sits next to. 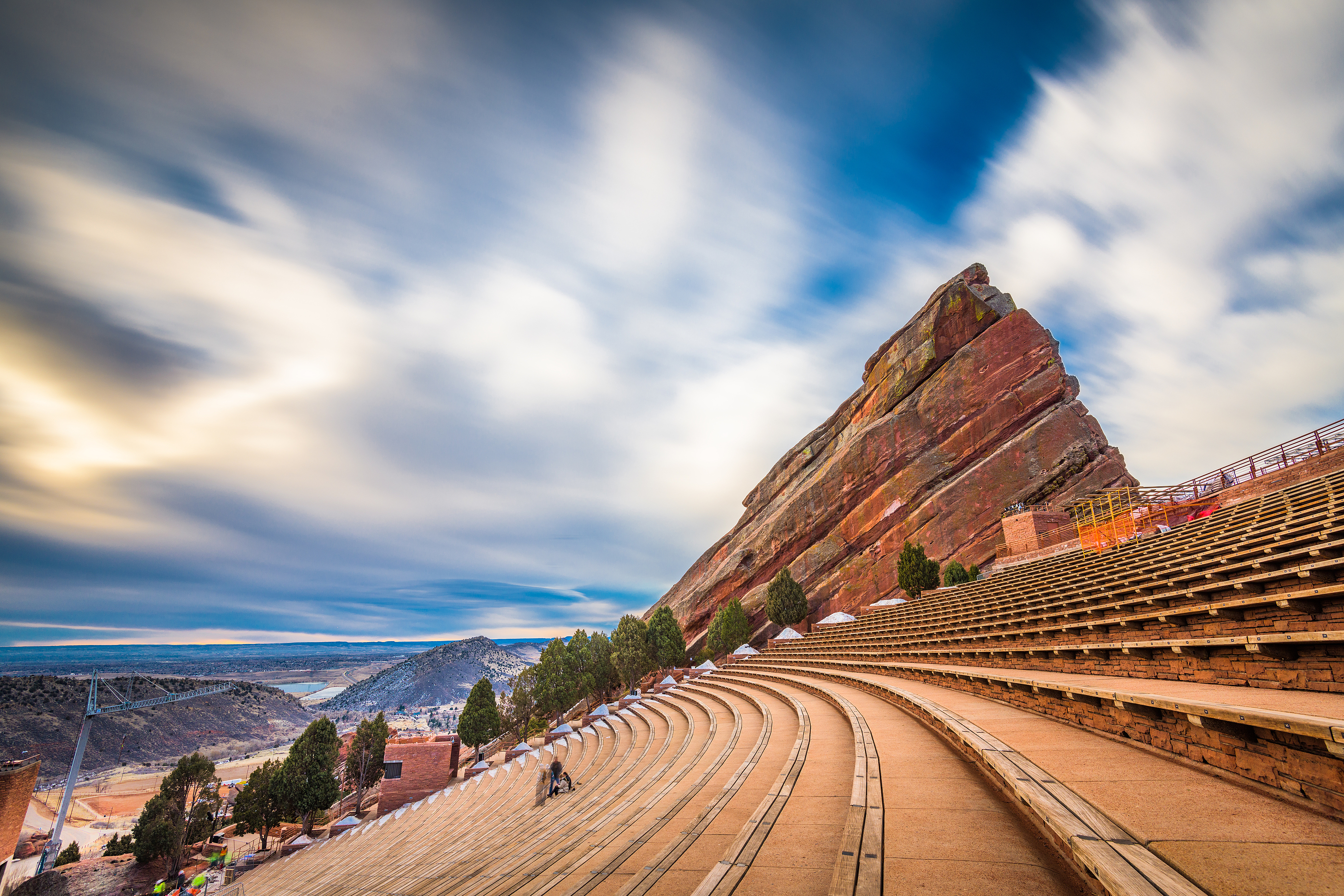 Located in Colorado, Red Rocks Amphitheatre is one of the most iconic concert venues in the US, noted for the many rock bands that has performed there:

This amphitheatre doesn’t have the seating capacity of many other outdoor venues, its iconic look and unique acoustics continue to draw curious tourists and major musical acts.

The distinctive red cliffs were formed of clay and silt sedimentary remains of the eastern edge of the Rocky Mountains, approximately 300 million years ago. On this foundation, Burnham Hoyt designed the amphitheatre with the intention to preserve the natural beauty and take advantage of the acoustics with minimal architecture. It ultimately took 12 years to design and construct and was completed in 1941. 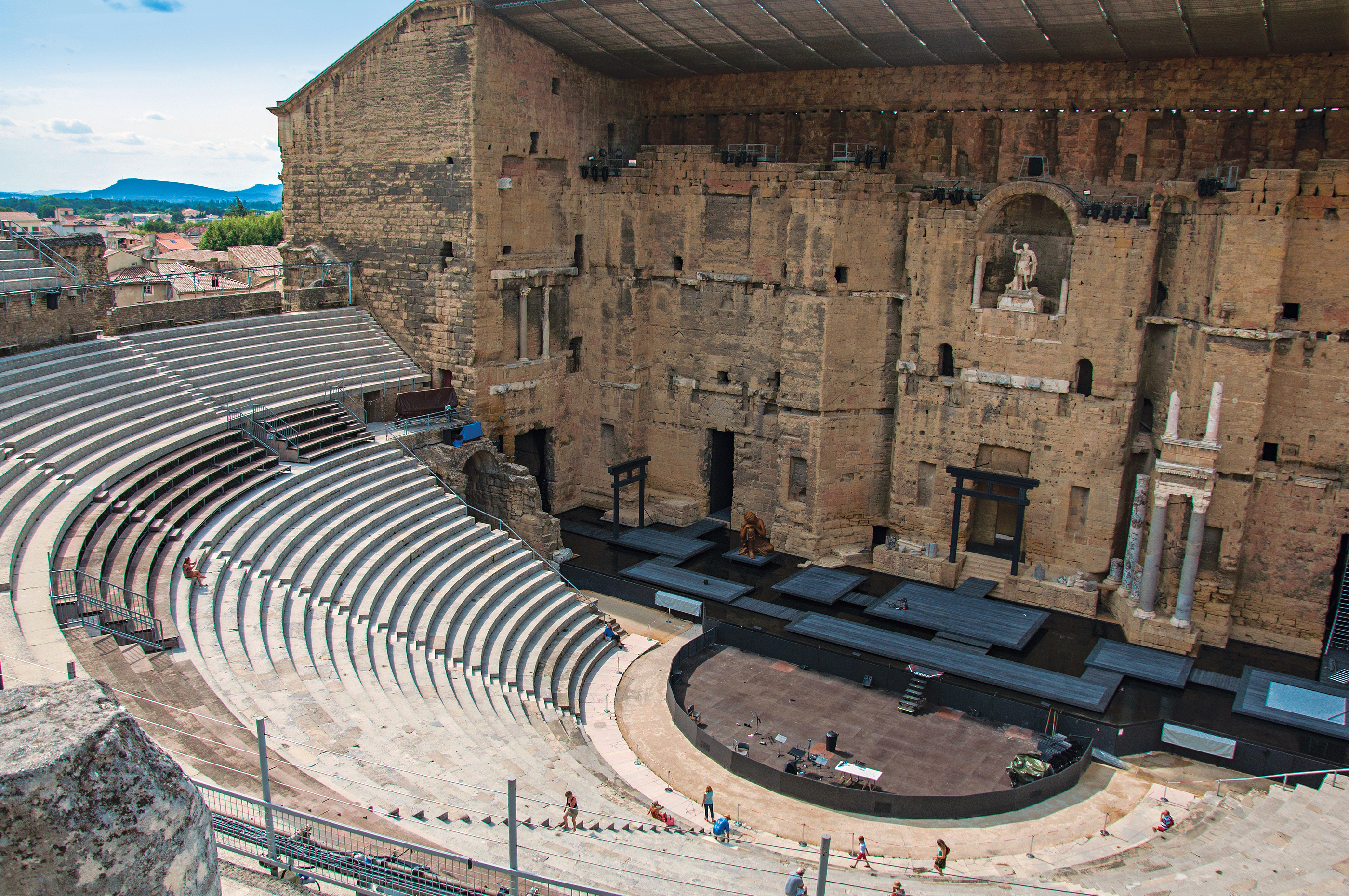 Translated as Roman Theatre of Orange, this Roman theater was built in the early 1st century ACE. It’s located in Orange, France, and it has experienced much in its lifetime. It was pillaged by the Visigoths at one point, and served as a defensive installation in the Middle Ages. Now, it functions primarily as a spot for opera, and as a major tourist attraction.

Trash Cans for All Types of Venues

At Trashcans Unlimited, we offer a huge selection of different concert hall trash cans for all sorts of different functions and venues. Whatever you waste disposal needs, we have you covered. Get in touch with us for more information.