A lot goes into the design and construction of concert halls, from architectural complexities to engineering the right type of hall for the audience and type of performance. A part of that complexity is designing a usable and comfortable space to accommodate the needs of the audience, from aisles and seating, to exits and lighting, including trash can accessibility. Trash cans that are attractive and accessible are important to concert halls for sanitation and preservation purposes— no one wants to attend concerts in halls full of garbage and debris left behind by previous audiences.

The Characteristics of Concert Hall Design

The heart of any performance facility is known as the room, which is the area in which the performance takes place, and consists of the auditorium, where the audience sits, and the stage. Room design is what differentiates between music performance venues and drama venues. Concert halls are designed with acoustics as the priority.

The “shape” of the room sets the criteria for both seeing and hearing the performance, which correlates with the actual size of the space. However, the important factors that affect acoustics more than anything else is the arrangement of people in the room itself. Seating, size, and arrangement all stem from the design of the room. Each design takes the following into consideration:

The majority of music venues are permanent; however, there are temporary music venues. Temporary venues are created for music performances most commonly, but can also be found for theater and other events.

Some venues only promote and hold shows of one particular genre, such as opera houses.

Stadiums, on the other hand, may show rock, classical, and world music.

Music venues are commonly categorized by size and capacity. The smallest venues, coffee shops, and tiny nightclubs have room for tens of spectators, while large venues can hold tens of thousands more.

Bandstands are typically circular or semicircular structures that accommodate musical bands performing outdoor concerts, providing shelter from the weather for the musicians. Bandstands and bandshells provide minimal shelter for performing musicians and are usually located in parks.

A temporary music festival is typically held at an outdoor venue. Examples of indoor venues include public houses, nightclubs, coffee bars, and stadiums.

Venues can host live music, recorded music, or a combination of the two, depending on the event or time of day. Discothèques are mainly designed for prerecorded music played by a DJ. Live music venues have one or more stages for the performers to do their thing.

At some venues, the main focus is watching the show, such as at opera houses or classical recital halls. In some venues that also include food and beverage service, the performers may be playing background music to add to the ambiance. Promenade theatre typically involves a more interactive approach, having the audience watch from the same space the performance takes place in, and even following actors around sets.

A concert hall is an interior space specifically designed for musical performances. Concerts halls come in many different shapes and sizes to accommodate the characteristics of its performances. 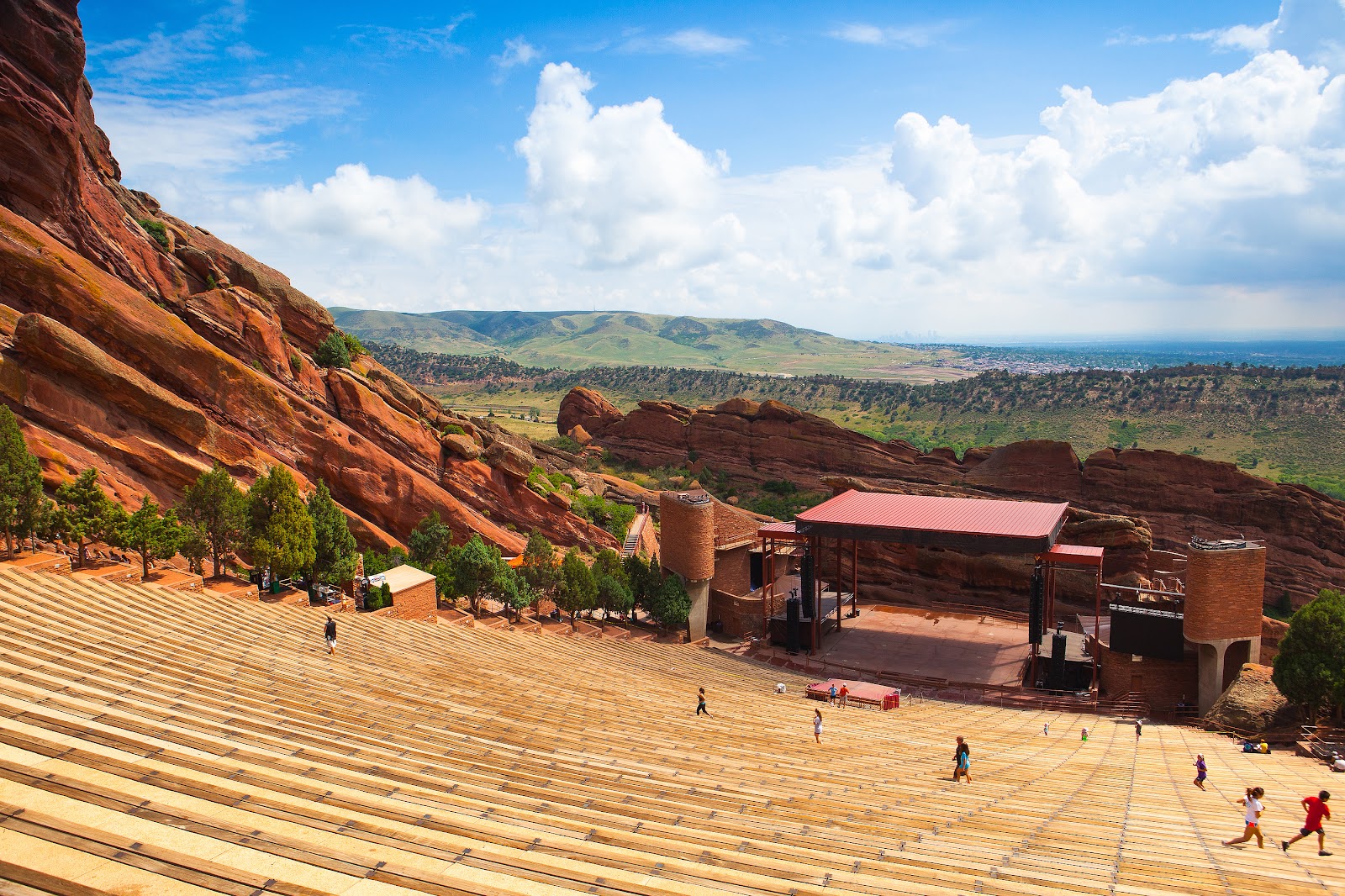 An amphitheater is a style of outdoor music and drama design that features a central oval space surrounded by elevated seating. An ancient example is Herodes Atticus Theater of Acropolis of Athens, which is a landmark of Greece. A modern example is a rock concert venue in Morrison, Colorado. It was previously referred to as the Garden of Angels from the1870s to 1906, and the Garden of Titans from 1906 to 1928, before it was formally named the Red Rocks Amphitheatre. 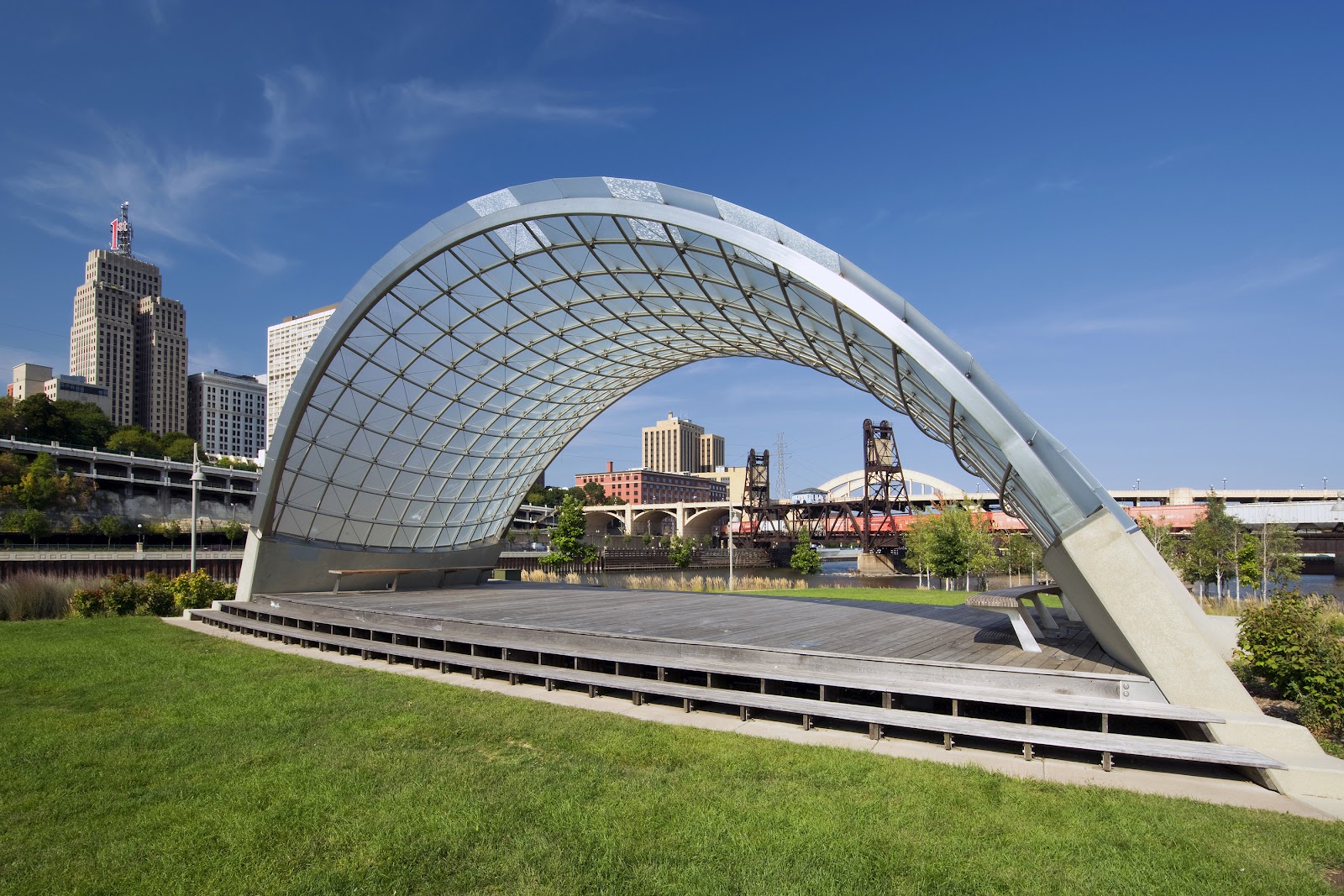 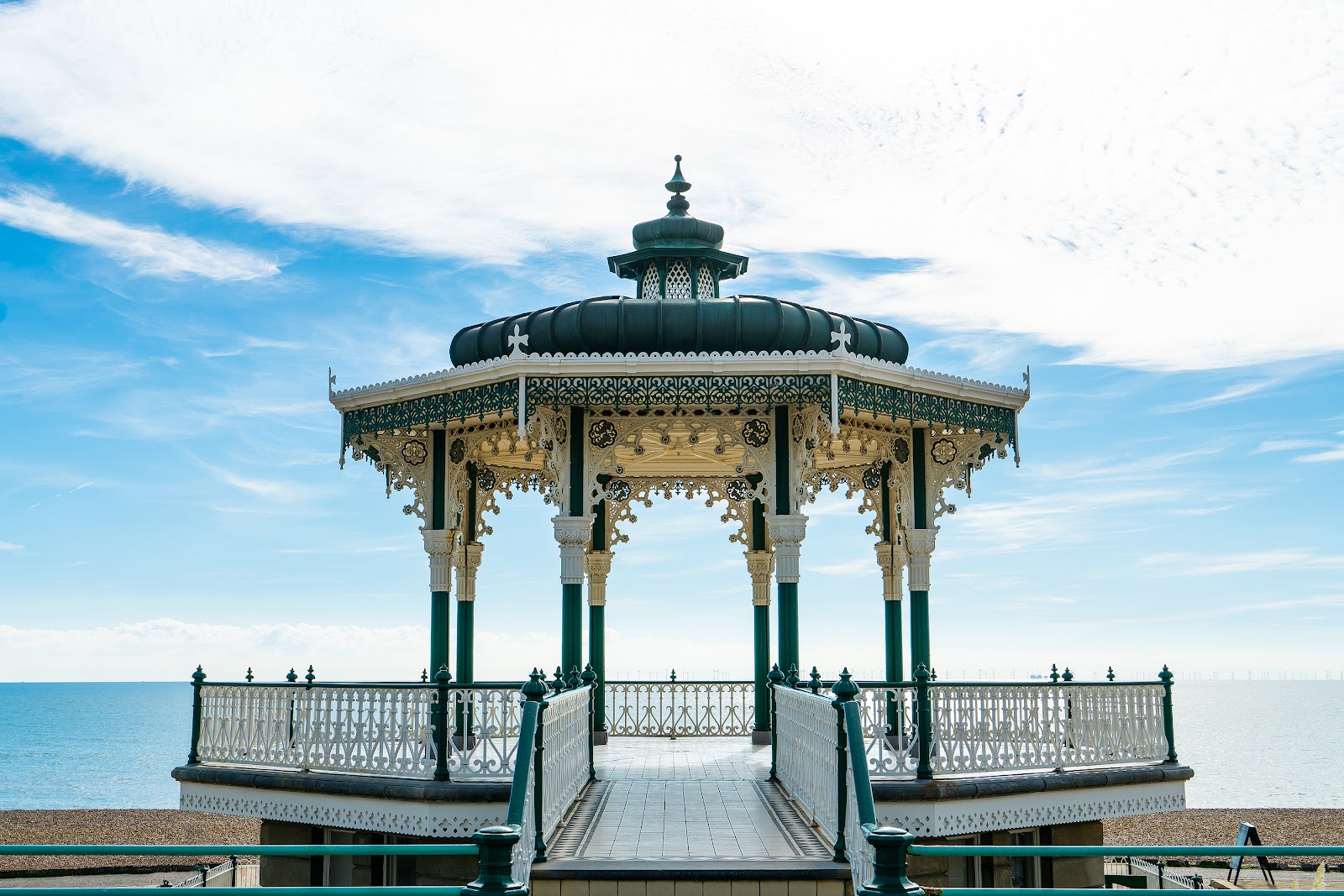 A style of outdoor theater resembling a pagoda. Frequently elevated with a concave back designed to improve acoustic performances. 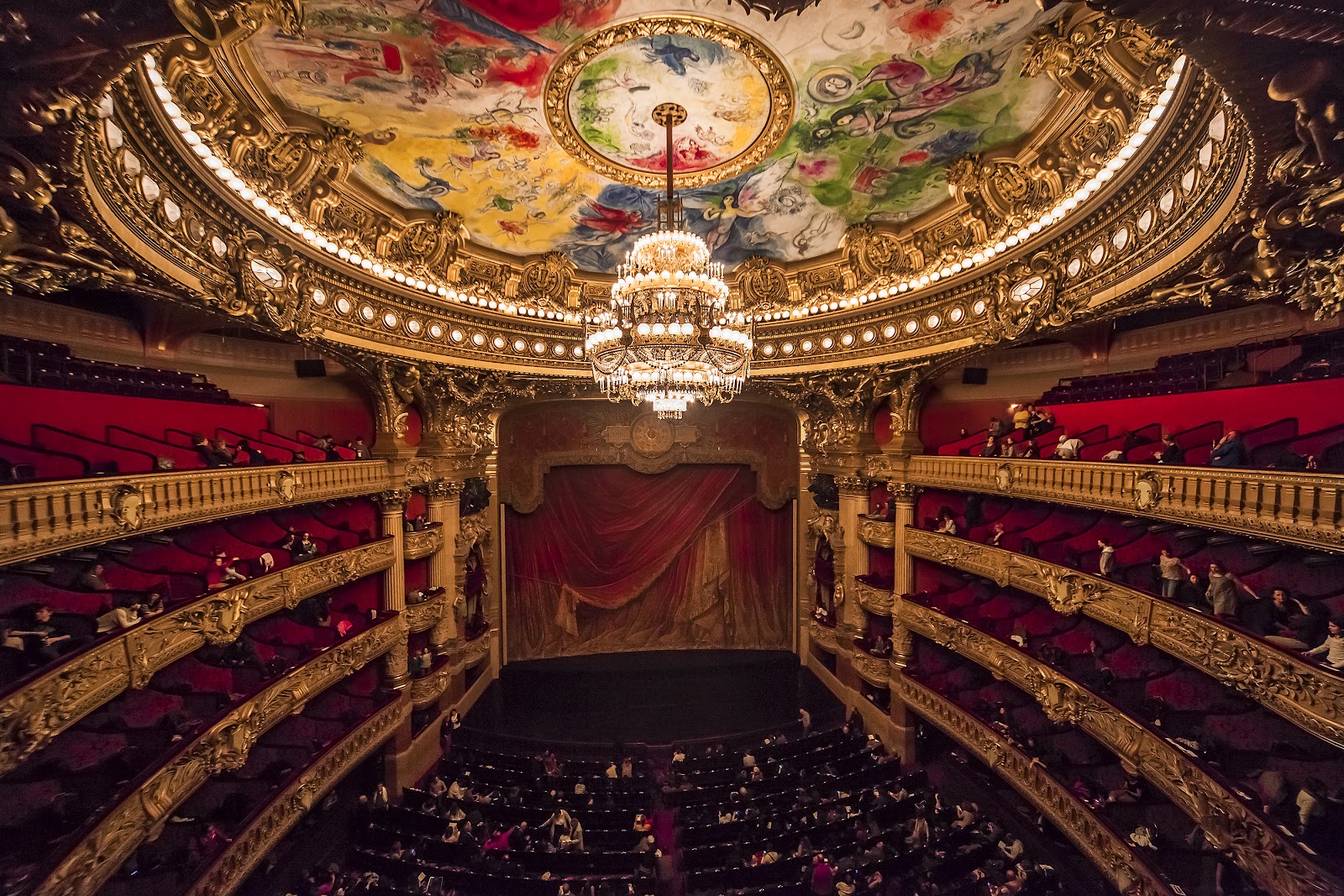 Opera houses are specifically designed for opera performances. They often feature a bandshell design to improve the acoustics. One of the most famous opera houses is the Palais Garnier for the Paris Opera.

Public houses and nightclubs are variations of bar environments that encourage informal performances. 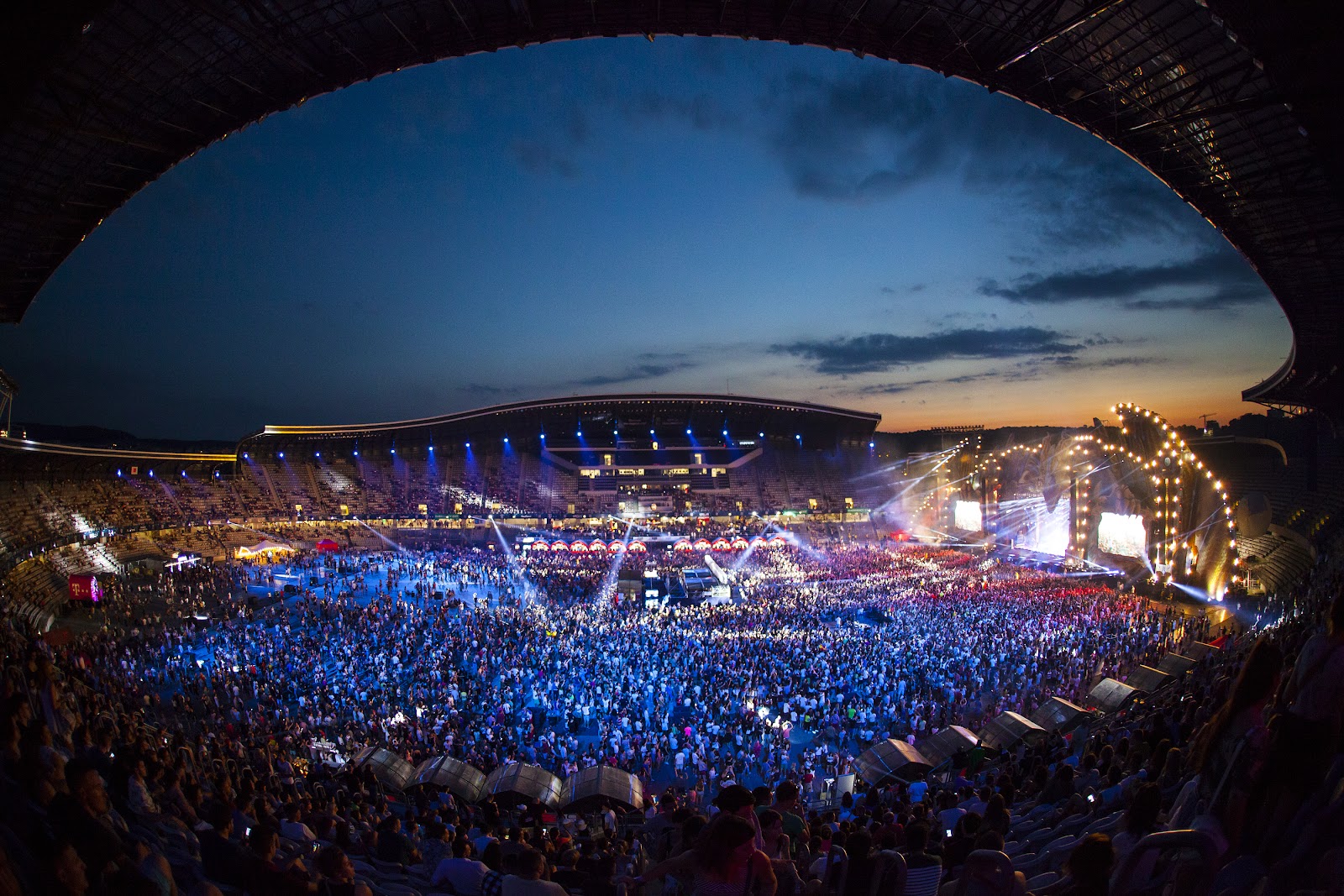 While typically used for a wide variety of performances and activities, the stadium seating around an arena stage is perfect for concerts. Seats are placed higher than the seats immediately in front of them so that the occupants of further-back seats have less of their views blocked by those further forward. Arenas are rectangular and allow the audience to sit on all sides.

There are numerous types of stages that can be built within the different types of design described above. Here, we’ve broken things down into different categories for ease of explanation. 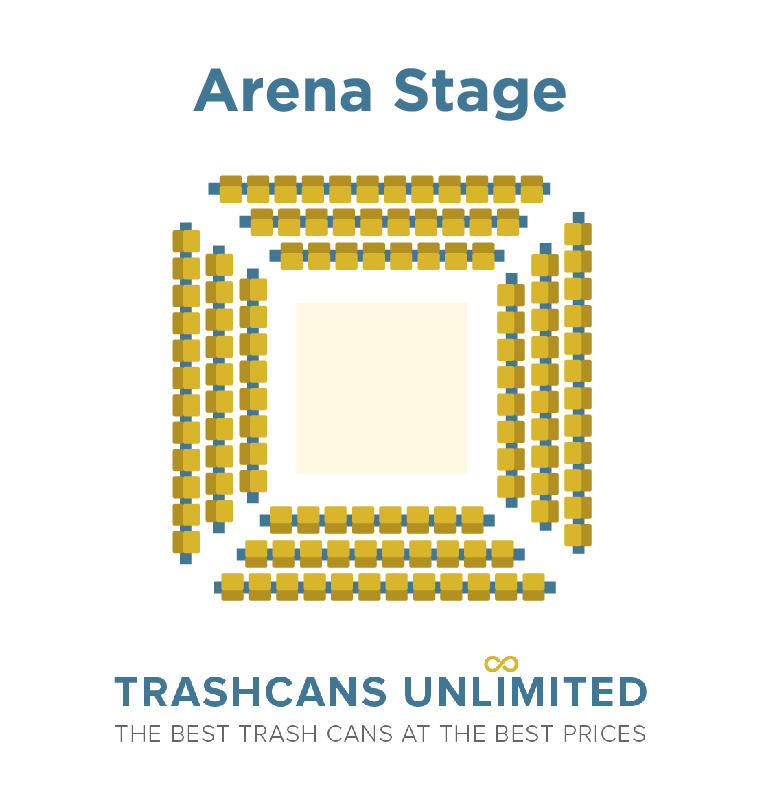 Also called an arena stage, is characterized by a central stage surrounded by audience on all sides. The stage area is also often raised to improve sightlines.

This stage layout is fairly common. It can be as basic as a raised platform at the end of a room, and the audience sits directly in front of the stage. If the audience were on three sides, it would be classified as a thrust stage. The primary difference between and end stage and proscenium stage is that the end stage doesn’t have an arch.

Usually outdoor theaters that are roofless, though sometimes areas of the stage or audience will be covered. Designed to make use of ambient light. 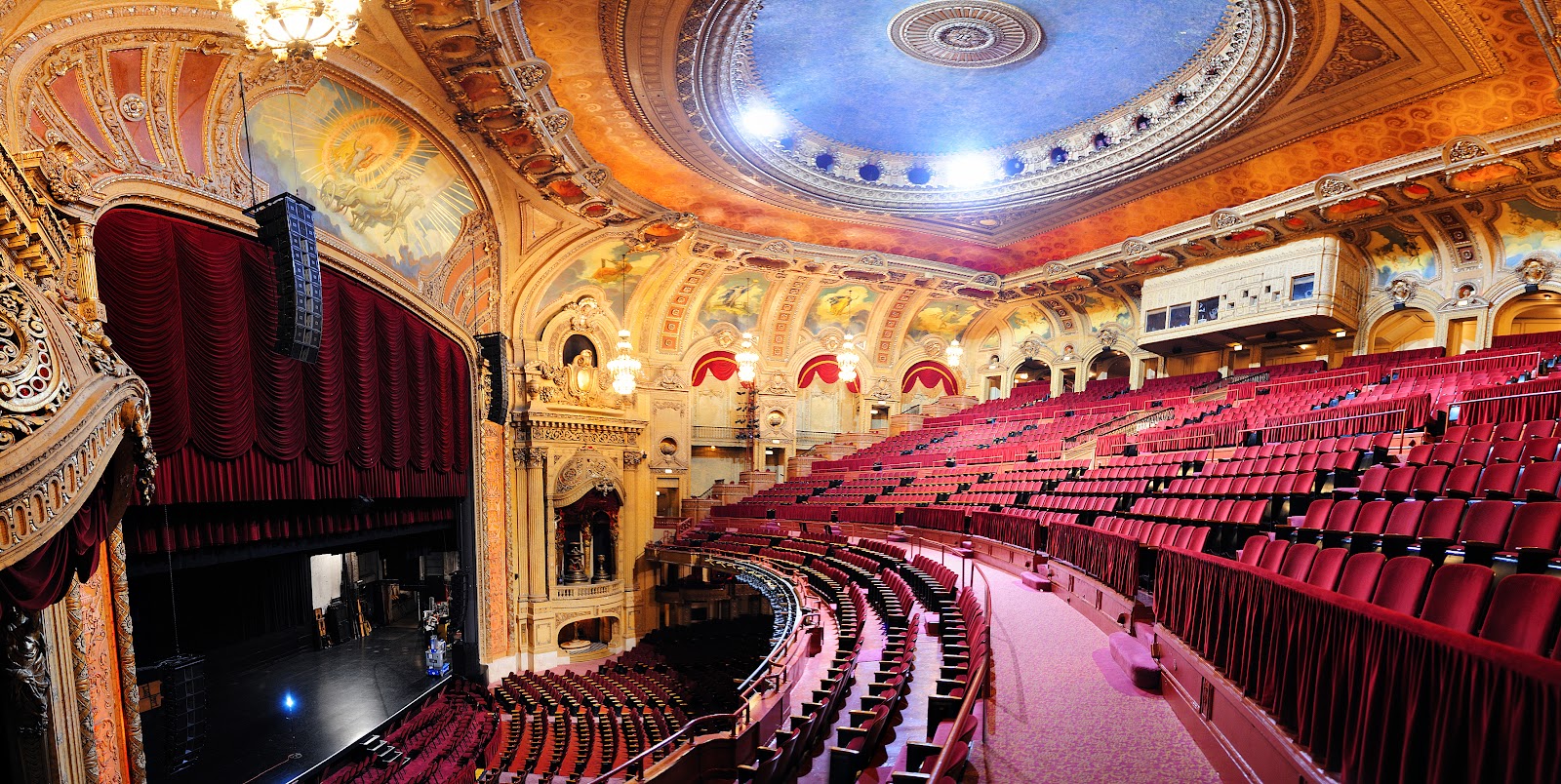 Usually a deep or raked stage that slopes away from the audience, framed by a large architectural frame, known as the proscenium arch. It is used more for drama and opera performances, than for solely musical performances because it is designed for both visual and acoustic clarity rather than only acoustic. The Chicago Theatre is a beautiful example of a classic Proscenium stage that is still in use today. 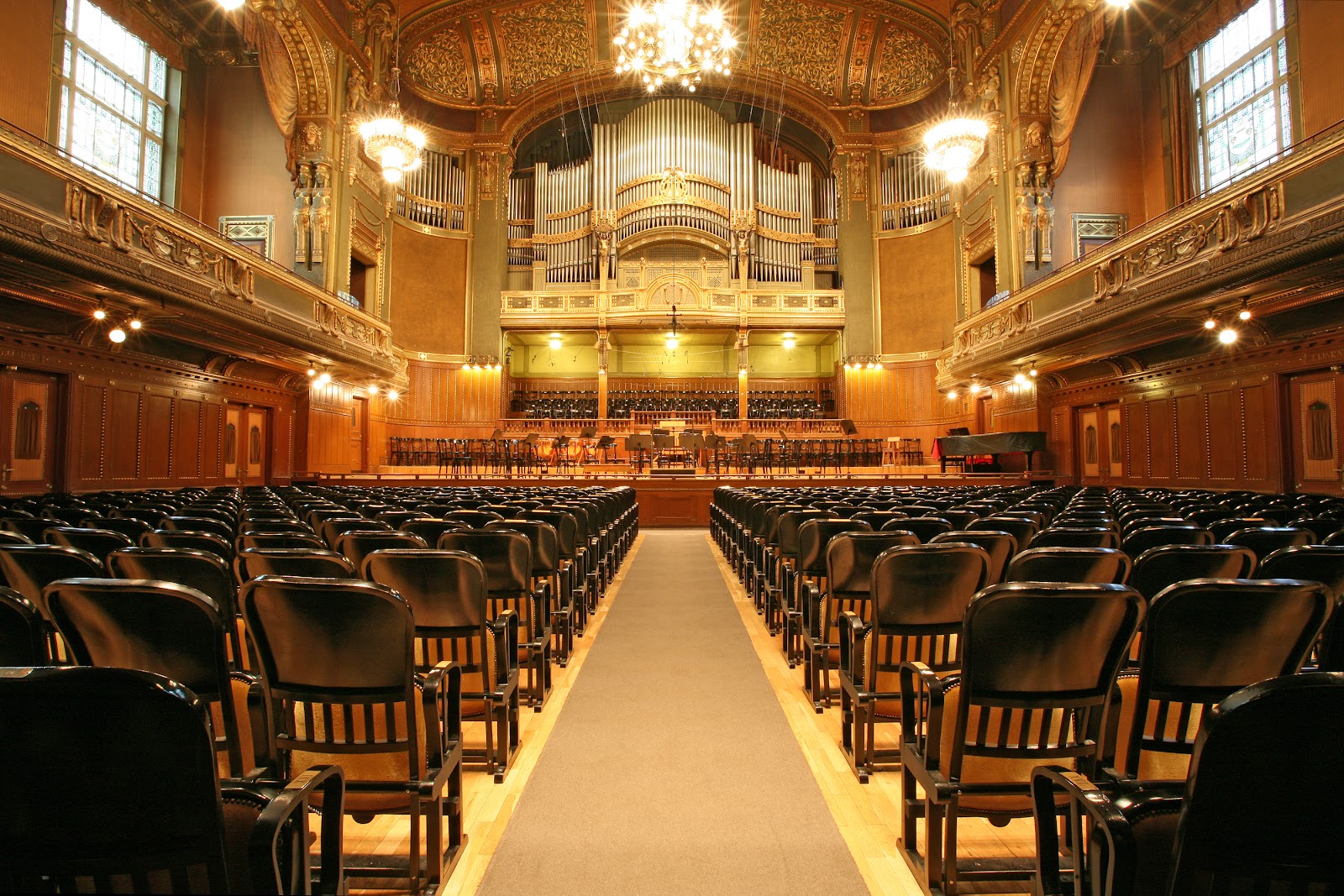 Unsurprisingly, this concert hall design resembles a shoebox— a rectangular auditorium, typically with the floor slanting toward the stage at one end. There may or may not be a specified space for the orchestra near the stage, depending on whether it’s used as a venue for opera performances or only musical ones. The shoebox hall is the classic and prevailing design found in many opera houses and concert halls because of its acoustic clarity. The Musikverein located in Austria is one of the most beautiful and well known examples of the shoebox style music hall. 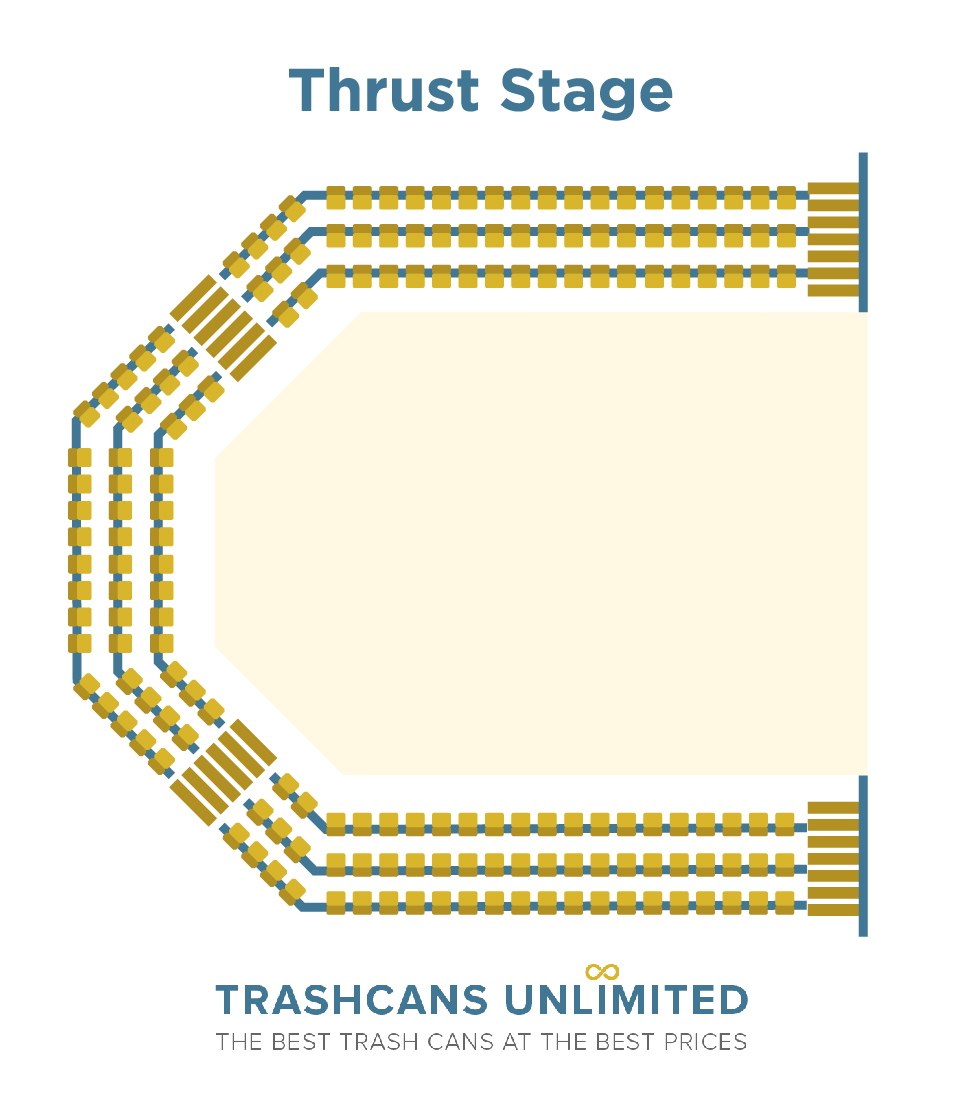 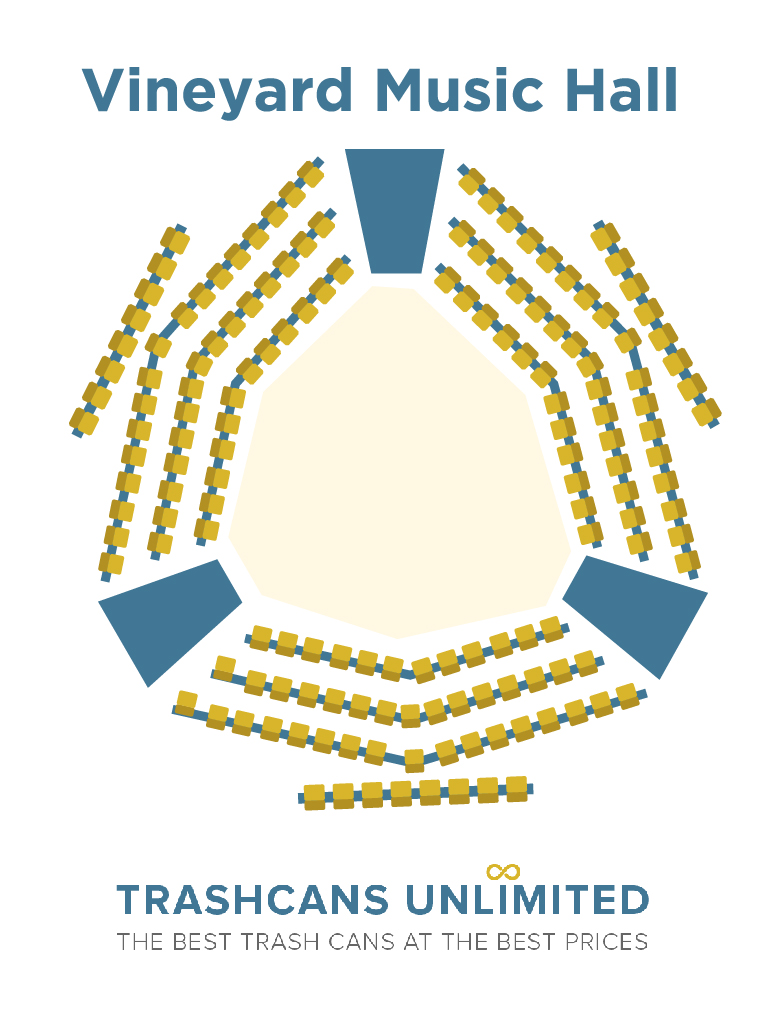 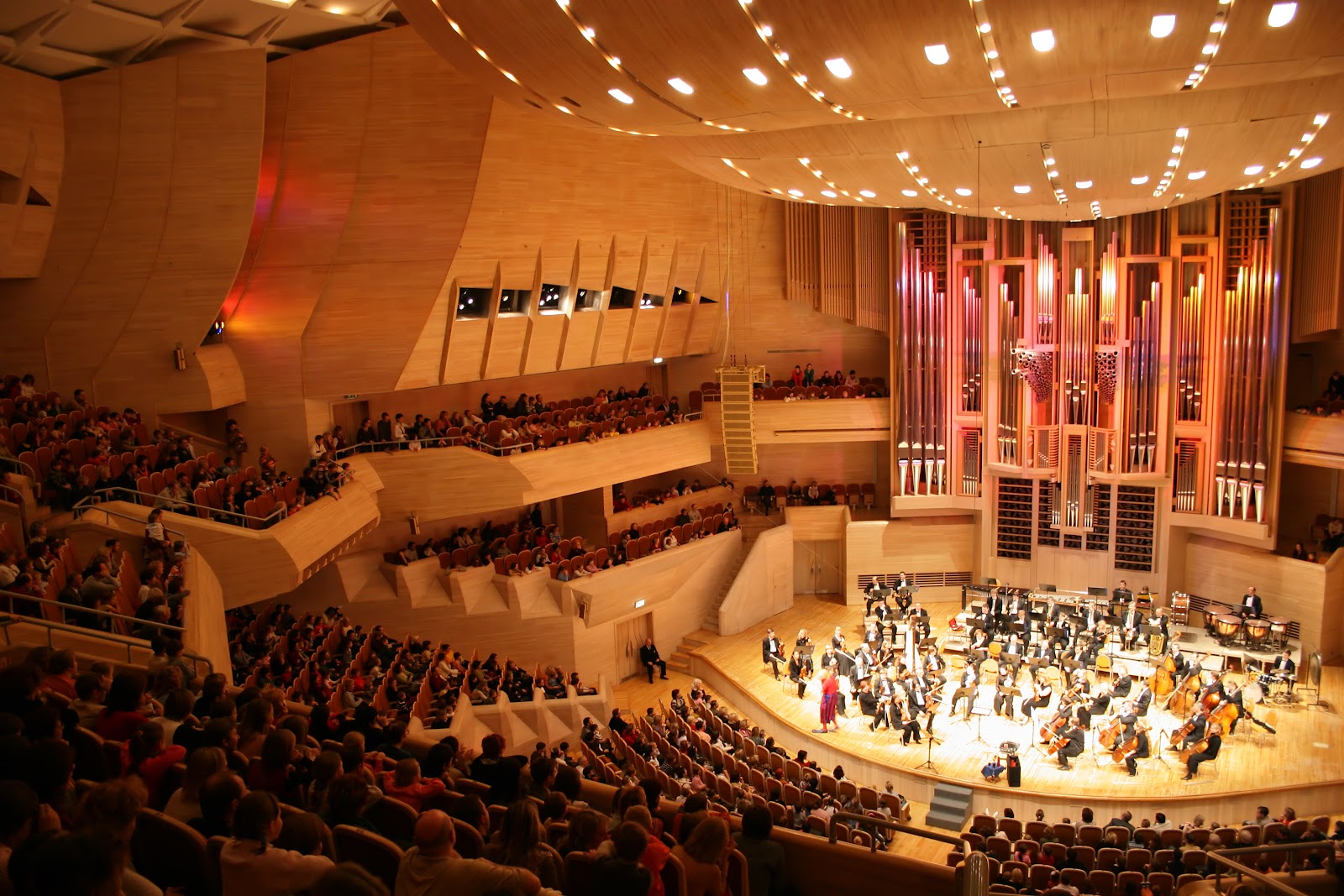 Named for the resemblance the seating has to sloping vineyard terraces— surrounding the stage and rising up in serried rows. The Vineyard style concert hall design has been making waves in concert halls around the world, from Frank Ghery’s Walt Disney Concert Hall and the Shanghai Opera House, to the Philharmonie De Paris and the Berlin Philharmonie.

No matter the venue, you need the right disposal equipment. Trashcans Unlimited is your one-stop-shop for all the disposal needs you might have. Get in touch with us for more information, or start browsing our products today.